Ug. After telling myself that I should try to start streaking during this pregnancy – because if I ran everyday then I was less likely to notice how much harder things were getting! – I decided to take Thursday off. My stomach still wasn’t feeling well and I was really tired.

Then Friday came and I didn’t get out early…

Then I convinced myself it was too warm to go later in the day.

At least Saturday I got out for my last “long” run! I was proud of myself for waking up at 5:40 so I could start running before the heat set in (high of 93 for the day!). I was reminded how glorious getting a run done super early in the morning feels! Minus the waking up part, that is 🙂

Sunday was another day off. I’m pretty good at this whole “streaking” thing, I think.

Monday 6/13: 6 miles, nice and easy through the arb. Stopped to cool down a couple of times.

I had asked Jerry how to edit this workout but hadn’t heard back. So – I decided that since 6:00 was likely faster than my original goal MP, I would run my 3 fast miles faster than I would this Saturday.

I met up with Craig in between rain showers during the day. After 3 miles easy, I started out with a 7:05 mile, and it felt good… minus the gasping for air part. Since WHEN did my lungs get so small? I felt like I was only using half of them, and even the half that was bringing in air wasn’t delivering O2 like they used to. Yay to becoming more and more pregnant?

Second mile was in 7:21. That’s better, but I was still shallowly gasping at some points. Craig reminded me to back off and find a sustainable pace.

Third mile was also in 7:21. I was practically walking up a hill in the middle of it (I could not bring air in fast enough!), and had very doubtful thoughts about finishing the marathon on Saturday. That’s probably a good sign that I was running too dang fast for the Tuesday before a marathon, much less a marathon I’ll run at 22 weeks pregnant.

I honestly hadn’t even thought about it! 9 w/ 3 hard was on the plan, so that’s what I did. I am just adjusting to the idea that I’m now running while very pregnant — so the original “plan” no longer applies. Up until a few weeks ago, there wasn’t much adjusting to do! That spoiled me a bit 🙂

I was wiped out the rest of the day. So, yeah, lesson learned.

My head was foggy today at work so I wasn’t looking forward to running, particularly after yesterday’s struggle. But, I felt better than I thought. I just need to get a good night’s sleep!

Thursday 6/16: Off
Sooo tired! Needed a nap more than I needed a run.
I’m also feeling pressure in my lower legs. Swelling, I’m assuming. Couldn’t that have held off until next week?
Friday 6/17: 12 minutes easy with a couple strides
My legs feel like they are definitely swollen. Not a huge confidence booster, but I did enjoy just having just a short jog to do! Yay taper!
Now, in to Duluth! I’m bib #20 if you care to follow me. I have no idea what to expect tomorrow. My goal is to soak in the experience; it will probably be the only marathon I do where I can look forward to stopping g and chatting at the aid stations and walking when I feel like it!
Good luck to everyone else racing! I am so excited for all of my TNC athletes competing! 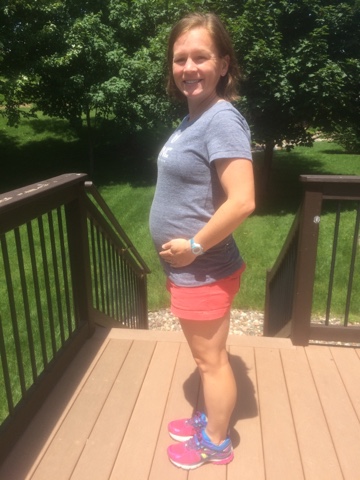 Let’s go, baby! 22 weeks today, growing healthily! So much so that none of my singlets fit so I’ll be racing in Nate’s blue TNC Jersey! I can’t say enough about the last 10 days.  It was SO wonderful to get away from the craziness of everyday life & to just enjoy being with Nate, running, hiking, the stunning views, crisp/clean air, and the peacefulness of being without a computer, work deadlines, and my iPhone. We ran and hiked a TON,… If you’ve followed me, you know the title says enough. I have not run a 3+ hour marathon since the beginning of 2009 when I ran a 3:03 in Houston off a horribly written plan. I had no idea what I was doing back then. But I will say that despite the craptastic finish time,… I went in for my 36 week appointment today. I was so excited for this – I’m not sure why. Perhaps because it signified the start of actually talking about delivering the baby?!? The appointment went great, except for one big part: baby has still not flipped into delivery position. It’s in a half breach/half…