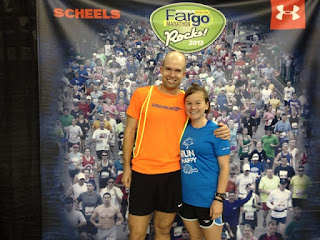 We arrived in Fargo at 11:30pm on Thursday, deciding to make the 4 hour drive two days before hand vs. on Friday.  Great decision.  The elite coordinator was SO nice about our arrival time.  I called him to let him know how late it was going to be and he paused for a second (I’m sure thinking, “Oh…. 11:30???), but then said, “Oh, not a problem!  I was going to be up anyway!  Let me know if there’s anything you need.  Anything at all – you’re our special guest!”.  Wow :).  Red carpet treatment!!

Nate and I moved into our apartment room and promptly got to bed.  I was wiped.

After sleeping in, we got out for our pre-race day run.  He went a whole 13 minutes and I went about 3.5 miles.  I’ve typically done about 10-15 minutes the day before, but am playing with my taper for this cycle.  So far, I think it’s been a little better for me – the legs felt a slight “push” today, not springy, but that “push” is almost more rare than springy-ness – but tomorrow will be the true test.  Can’t speak too soon!

We then ventured to the Expo.  For a small expo, it was great!  A lot of free samples and friendly vendors!

We were lucky enough to stop by the Swanson booth while Dick Beardsley was signing books.  I was ACTUALLY just thinking how I needed to buy a copy of “Duel in the Sun” (the book that inspires me to hurt in a marathon), so I was pumped to be able to get a copy autographed.  I was also able to spend a lot of time talking with him.  There were a few questions I had that he had insightful answers for.

The first is that I don’t feel ready for a big breakthrough.  How do those come along?  If I had to guess my finish time tomorrow, it’d be between 2:45-2:50 (also factoring in the fact that it’ll be warm, and everyone knows how terrible of a warm-weather racer I am).  None of my tempos have been below 5:55, and most  of them have been about 6:00-6:05, which points to about a 6:20ish mile pace.  But at what point to you throw caution to the wind and just try for something crazy?  His answer was XYZ marathon (can’t remember which one).  He went to write his mile splits on his arm but stopped after mile 2.  He decided he was going to go out with the leaders and just see what he could do, how long he could hold on.  He lasted 15 miles with them and then faded – but faded to a 2:15 finish.  Previously, all of his finishes had been 2:21-2:22 and he was just hoping for sub 2:20.

The second was how to break out of a rut.  I’ve been stuck at 6:00 tempo pace for a while (although, last summer had a nice 4-6 week streak of 5:40-5:45 cruise interval workouts, so it can be done!).  How do you propel yourself faster in workouts?  Did he ever hit a sticking point with paces?  He said he did, but that when he moved under Squires, he had him add 8-10x 100m stride-outs 3x per week.  Not sprints, not all out, but just to get the legs firing quickly.

The other piece of advice was to take the 20+ mile runs hard.  Fartleks, intervals, etc.  Although I’ve done well with this in the last year, I can do better.  Often when Jerry writes a 20+ mile workout with tempo and MP or other pace changes, I’ll stop before and afterwards, sometimes for a while.  The point is probably not to stop like that.  Also, perhaps I can add in some shorter fartlek pace changes into the long runs?  Will propose to Jerry, see what the genius thinks 🙂

Then, a great pasta feed, strategizing about the course, where people will be cheering, etc.   It’s fun to have so many family members up running the full with me, as well as a lot of family up cheering!  That really does make an event that much more fun.

And now, time to put the finishing touches on the race pile and then get to bed early.  If anyone wants to track me, I’m bib #16!  And while you’re at it, say a prayer that there’s a slight rain during the race to help cool the day… 🙂

Training has gone a little better since my last post, so that’s great! I did just two workouts written from Chris this week. We’re specifically taking it easy as I’m not ready to jump into anything defined yet, either physically or mentally. The first workout was a 7.5 miler with a progression HR build. I’ve… The foot has healed great.  I was able to run 2 miles yesterday, plus an hour elliptical. Today I was able to do 6 miles, plus 45 minutes on the elliptical.  Super excited about that – it means I’ll be able to resume training as normal next week (obviously cognizant about how the foot is… Quick update: I had SUCH a fabulous experience in Houston this weekend. It was the experience of a lifetime, really — from the Opening Ceremonies to the race itself (and evertything in between). The race went really well. My legs didn’t have their best day – I struggled to find a rhythm and to be…