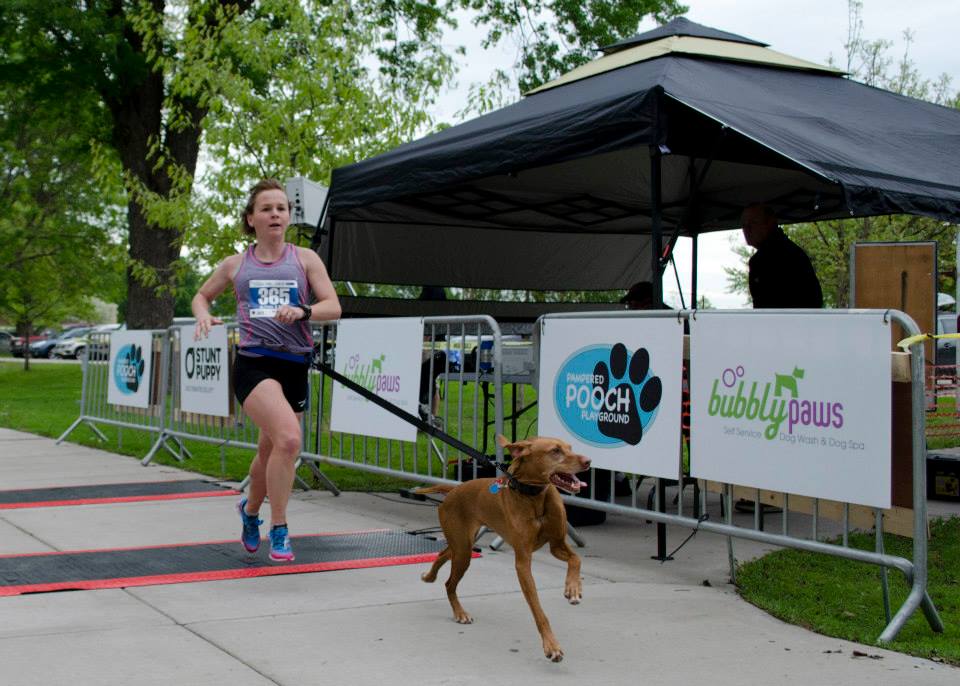 What a fun morning! Stunt Puppy invited us to participate, and of course, Mesa and I couldn’t turn down the opportunity. We’ve done one other 5k race together and it was an absolute blast.

I specifically didn’t run Mesa the day before so she’d be nice and “rested” and more apt to pull.

We arrived pretty early so I could get a 3 mile warm-up before hanging out at the Stunt Puppy booth before hand.  I did the 3 miles alone, Nate and Mesa chilling in the car waiting (again, trying to “save” Mesa’s energy). I then grabbed Mesa and headed to the booth.

Here’s where I regretted not having worn her out a little bit. She was SO excited about all the other dogs, people (and policemen mounted on horses!) that she wouldn’t just sit and be normal.  Mild embarrassment.  Oh, Mesa… 🙂

So instead of try to reign in her energy, I took her on another 1 mile warm-up.  She pulled the entire way (how does she KNOW we’re at a race? She has never once pulled like this on a training run… I wonder if she can sense something in me? Or if it’s just the venue?).  No big deal, that warm up mile was in 6:30. 🙂

We then lined up for the start.  I heard Mesa’s name being called and looked to the sidelines.  Her previous owners came to watch!!  How cool is that? The entire family was there to cheer her on, including their two young boys.  It is really fun to still be connected to them – they’re such a nice family.  Plus, it’s nice that Mesa has an “extended family” of sorts that still really love her.

The older of the two boys was asked if he had any memories of Mesa.  He said, “Yes…”.  “What do you remember?” I asked.  “Mesa would run away and Daddy would have to find her”.  HAHAHAHAHA.  Funniest thing I’ve heard in a while!  He’s 5 now so would have been 3 when we adopted Mesa. For that to be one of his “memories” is pretty funny.

[Note: Now that she runs 50-60 miles a week with me, she is the best dog! She hasn’t run away in… probably a year? So it was just exercise related – she probably escaped to go exercise herself!]

The gun went off, and Mesa was more than ready.  She went out in front of me and pulled the entire way.  She knows the command “turn”, so whenever there would be a turn in the course I’d breathe the command and, without a jerk or even mis-step, she would turn where she needed to.  Mesa, you’re pretty awesome. In case you didn’t know.

Around mile 2.25, she wasn’t pulling as hard.  I looked at my watch and knew we were on pace for a sub-17 minute 5k if we could just keep the pace up.  I dug and inwardly willed Mesa to PULL LIKE SHE’S NEVER PULLED BEFORE!

We rounded the last turn and hit the 3 mile mark.  I had 40 short seconds to get to the finish!  Mesa must have sensed my urgency because she became really excited & pulled.  C’mon legs, I told myself!

This was SUCH a fun event!  For anyone that trains with their dog, I’d definitely recommend finding a K9 friendly race. Everyone is so low-key and friendly.  It’s also fun to see everyone with their dogs. And you don’t need  a crazy fit Vizsla to do it with you – there are people with fluff-ball dogs, huge Great Dane’s (who are practically walking next to their running human companion), overweight dogs, and everything in between.

I have to end this with a huge thank you to Stunt Puppy for sponsoring Mesa.  She is such a happy dog now that she’s running so much, and I absolutely love having her as a training partner.  I seriously can not imagine going out without her!  Here’s to thousands more miles together, Mesa! XXOO

Another indoor personal best! To be honest, I was really hoping for something in the 40s, (I think when I set out goals a few months ago, I was hoping to be around 17:45 by this point in time). But, it wasn’t a bad race by any means (very tactful, a lot of women vying… A 24 second improvement over last week. Yeah! Still not quick, but guess I can’t complain since I’ve only been back running for 4 weeks. It was a lot harder than the last 5k — my legs are a little dead. Last week was 30 miles with 2 days off. This week was 40, with…